Our first attempt to build a simple but comfy campervan.

HDH said:
After that I worked on the "Fuel delivery module". The DEF fill tube had arrived and I modified it so it will work with my auxiliary diesel fuel tank. I cut the entire bottom section off the unit because it was very stiff and difficult to route. Instead I bought some flexible fuel lines for the filler tube and air vent and connected it to the upper portion. One "Fuel Delivery Module" completed. 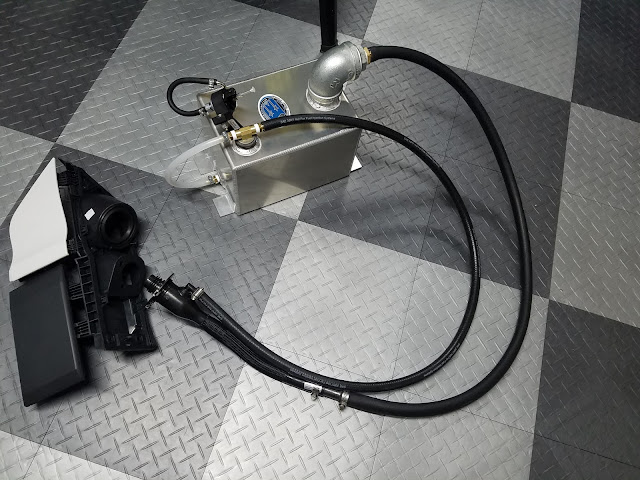 perchancetodream said:
Where did you source the larger fuel tubing? The DEF filler hose is 7/8" ID but the barb seems big enough for 1" ID.
Click to expand...

The hose in the picture was a temporary hose that wasn't rated for diesel fuel. I found a diesel transfer hose at a local farm store (Wilco). They have diesel transfer hoses of different lengths and diameters with fittings on both ends.
► Show Full Signature
Build thread starts here: https://www.fordtransitusaforum.com/posts/629154

1 : in the upper rear left of the picture , what is the black thing with the hose that circles back around to itself?

2: how come the vent tube has a hose that tees off and goes down to the bottom of the tank?

3: when you ordered the tank did you have to specify where and how many holes , or do all tanks just come like yours with 2 holes in the top and 1 hole on the bottom?

Joined Jan 2, 2015
·
1,194 Posts
That's one of Boyd Welding's standard universal tanks. https://www.fueltankparts.com. You can order a custom tank with variety of fittings. Cost is reasonable, at least relative to the entire van conversion enterprise . I didn't like the unnecessary 2" filler neck on the universal tank and got a tank made with a fitting for a sending unit instead. http://moellermarine.com/moeller-marine/fuel-accessories/reed-switch-fuel-sending-unit-6-inch-tank-depth-035773-10/
Tank drawing attached - 2.5 gallons. My original thought was to tuck it up in the first space aft of the filler neck, but now that I'm working under there, I find the corner of the perforated angle framing would be uncomfortably close to the gasoline filler hose. I've moved to hang it further aft and under the beams similar to HDH, so in the end, the tank could have been larger. Also, the DEF filler neck hose is 1" ID - I could have gotten that size NPT fitting in the tank instead of 3/4". But it was winter, and I didn't spend enough time under the van when planning, so....oops, making do. edit - 3/4" NPT fitting is ok - 3/4 male pipe thread to 1" hose barb elbow is available - for example: https://www.hardwareworld.com/pgjxhn4/1x3-4mip-Elbow

Joined Jan 18, 2014
·
5,222 Posts
You could consider having your local welding shop make you a tank. That way you can have whatever dimensions you want and the half couplings the size and location where you want them. Make the tank out of cardboard with the holes to show them what you want.
► Show Full Signature
2015 high roof 148" WB 3.5 Ecoboost 3.31 LS rear cargo.

Mobileempire said:
Regarding the fuel tank , I have 3 questions

1 : in the upper rear left of the picture , what is the black thing with the hose that circles back around to itself?

2: how come the vent tube has a hose that tees off and goes down to the bottom of the tank?

3: when you ordered the tank did you have to specify where and how many holes , or do all tanks just come like yours with 2 holes in the top and 1 hole on the bottom?

1: This is the fuel supply pump for the Espar heater. I decided to mount it on the tank so there is a very short suction line, which makes priming a breeze. The heater installation kit came with a pump bracket where the pump has the correct angle.

As Perchancetodream mentioned, Boyd Welding can build whatever you want.
Click to expand...

Spent the night in Skagitstan country last night. Parked the van in an RV resort on the Fidalgo Bay in Anacortes, Washington. They call it a resort, which is a fancy name for parking lot, so they can charge more. We planned to take the early morning ferry to Sidney on Vancouver Island, so the overpriced parking lot was convenient.
It was a beautiful ferry ride via Friday Harbor on San Juan island. We're now exploring the island and staying mostly in Provincial parks. These parks have spacious and clean campsites, which we prefer over the "resort" parking lots. This is our 2nd camping trip in Canada this year. We love Canada!

Joined Sep 3, 2018
·
2 Posts
The electrical panel is a temporary set-up until I get some house batteries. This panel will eventually turn into a box, which will house the additional batteries as well. See earlier posts for details regarding mounting of the cabinets.
H

Jovinian said:
The electrical panel is a temporary set-up until I get some house batteries. This panel will eventually turn into a box, which will house the additional batteries as well. See earlier posts for details regarding mounting of the cabinets.
Click to expand...

HDH said:
I do still have to install a vent in the cap to prevent pulling a vacuum when the level in the tank drops. Not sure how Ford does this with the diesel DEF tank. The original cap and DEF filler tube have no outside vent, just the vent line back into the top of the filler neck. There must be a vent valve on the DEF tank.
Click to expand...

perchancetodream said:
What did you end up doing for the vent?
Click to expand...

Researched it a bit and was either going to install a small spring loaded vacuum breaker (check valve) or purchase a vented DEF cap. Not sure if there is one available with the same thread.
Until now I have been loosening the cap a little when I ran the heater. Hadn't really used the heater all summer until this past week. We went to the most Northern point of Vancouver Island where it was a little chilly at night.


I just read your post about the "Vented DEF Cap" and will have look to see if that's the solution for my situation. Thanks!
► Show Full Signature
Build thread starts here: https://www.fordtransitusaforum.com/posts/629154

Made it to the Northern part of Vancouver Island last week. Great place to explore in the campervan. Went to Port Hardy, Port Alice and Telegraph Cove for some whale watching.

Joined Mar 18, 2015
·
435 Posts
Great place to be. Remember the times that I spent on the island. Once stayed the whole winter there. Victoria is the place to be in spring. Enjoy!
Van Williams
► Show Full Signature
Replace(d) my old Dodge B-250 with a new Ford Tansit-250 LWB Medium Roof and convert it into a full-fledge RV with ultimately all amenities imaginable!

We've had our Transit T250 MR EB now for over 3 years and still love it, but I'm ready for the next build.


The Transit is great and our conversion works very well. This year we've taken it on long trips to Canada twice and we camped many weekends on the NW Pacific coast and in the Cascade Mountains.


In August I bought an enclosed trailer to haul my motorcycle(s) and converted it into a Toy hauler/camper. I love the fact that I can actually stand up straight in it without rubbing my head on the ceiling. However taking the trailer is much more of a hassle than just taking the van. With just the van we're parking and ready to relax. When bringing the trailer we're stressing about getting a camping site large enough to fit the van and trailer and than we have to hook it up to water, power and level it with stabilizer jacks. It's great when traveling with the bikes and setting up for a week or longer but it's a major PITA when just doing it for 1 or 2 nights.

So does that mean your getting a new Transit?
► Show Full Signature
TNorth

TNorth said:
Looks like you are living the good life. We hope to get up there this next year.

So does that mean your getting a new Transit?
Click to expand...

Thinking about getting a tall extended Transit. Need to move first to a place with a big shop because I won't do a conversion in my driveway again.
► Show Full Signature
Build thread starts here: https://www.fordtransitusaforum.com/posts/629154

Joined May 7, 2015
·
37 Posts
I hear you on the indoor shop. Trying to finish a home made rack for my rocket box in 20 degree snow flurries.

I hope things go forward as I would really enjoy seeing your next build.
► Show Full Signature
TNorth

There is still a TO DO list of small items that I need to work on, but I got a little tired of the build and we've just been using the van as it is. Everything works great.


At the moment there are only 27.5k miles on the van, which is very low considering that I bought it new in July of 2015.
This week I went under the van to make sure that the auxiliary diesel tank and hoses were all tight and in good shape. All was perfect, but I did notice that the drive shaft guibo was showing some cracks. I had called and asked the dealer several times before to replace the guibo for the new improved version, but they didn't want to do it since the vehicle had less than 30k miles.
This time the dealer agreed to replace the guibo since there were some cracks. The service advisor called me while they were working on the van to inform me that the rear brake pads needed to be replaced, the brake discs were still in good shape. I normally do all the maintenance myself including the brakes, but since they had it on the bridge I decided to let them do it. I'm a little disappointed that the brake pads only lasted 27k miles but I guess I can live with that.
► Show Full Signature
Build thread starts here: https://www.fordtransitusaforum.com/posts/629154