Joined Dec 2, 2016
·
10 Posts
I know this is a Ford transit forum but without being biased if you had to purchase a cargo van again. Which van would you purchase and why.
D

The Ford, because the name of the manufacturer is spelled in proper cursive letters.

The Dodge, with it Luciferian Ram horns just seems like the damnationmobile to me.

Joined Apr 18, 2015
·
459 Posts
If you want a basic no frills and cheap to maintain van, RAM.
If you want something other than 2 seats and a steering wheel, Ford.

I helped a friend put a floor in their new RamPro.
One caveat of the Fiat:
The "regular height" van is almost tall enough to stand up in, you just have to bow your head a bit (I'm 5'10"). The low roof Transit, fuggedaboutit.
Otherwise, I thought it was pretty similar in material quality to the Transit. The reason I bought Transit was because it was the lowest price for vans that had what I wanted, and there were more to choose from. If you're buying new, compare the warranties.
U

Joined May 27, 2014
·
2,009 Posts
Originally Promaster's could only be serviced at certain dealers that were licensed to work on them, sort of like the Sprinters. Has that changed ? If not, travel would have to be planned with approved dealer locations in mind in case of a problem.

Joined Jun 21, 2017
·
179 Posts
I shopped both and really wanted to like the Promaster because of FWD. However, I liked the Transit better. It was more comfortable and had a much smoother ride. It felt less truck-like than the PM. I also believe the Ford will be more reliable in the long run. YMMV
A

Joined Apr 22, 2019
·
83 Posts
Ford, been driving their vans for over 30 years and I absolutely hated every Dodge/Chrysler product I ever owned.
T

avenge said:
Ford, been driving their vans for over 30 years and I absolutely hated every Dodge/Chrysler product I ever owned.
Click to expand...

USMC Vet said:
Originally Promaster's could only be serviced at certain dealers that were licensed to work on them, sort of like the Sprinters. Has that changed ? If not, travel would have to be planned with approved dealer locations in mind in case of a problem.

That would apply to warranty work. In the real world, the engine and trans are so common any shop can fix them.
U

phil said:
That would apply to warranty work. In the real world, the engine and trans are so common any shop can fix them.
Click to expand...

Said Dealers. Have one 1 mile from me, they weren't allowed to touch them, when I was checking around.

Joined 8 mo ago
·
409 Posts
I'm 6'5". The Transit was a given since it has the most headroom in the HR version. AWD is also a big plus. Best availability of service.

The Ram ProMaster, a Fiat Ducato with ram-head logos, is a detestable, shovel-faced thing that appears to have been cobbled together from spare parts. Too harsh? No, not really. The ProMaster itself is an insult.

If you want to read more... 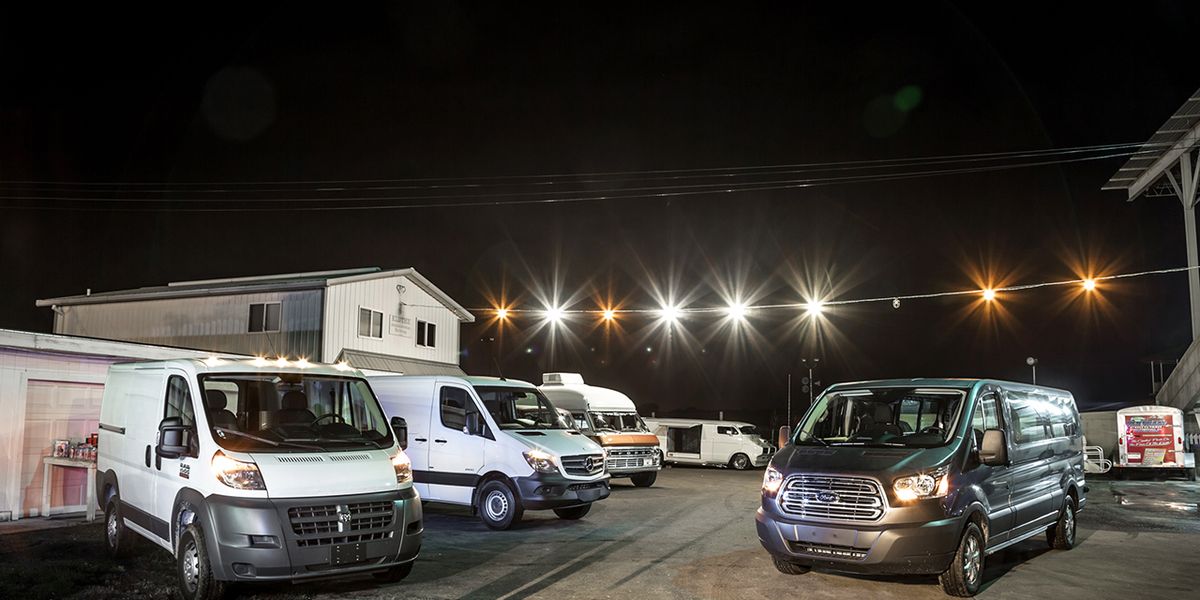 We sample (and soil) a few new cargo vans and find that none of them offers CB radios.

Joined Oct 17, 2016
·
291 Posts
We test drove the Dodge, Ford, Sprinter and Nissan. I was advised by a good friend to stay away from the diesel and did not like the looks of the Nissan with wasted space on the front. The cargo area of the Dodge is more square, which would have made the build out easier. Also the cargo floor is lower which makes getting in and out easier in the Dodge.
BUT, We hated the view area - perspective from the driver and passenger seats when compared to the Ford. This is probably very personal. The limited view (barely any upward view) in the Dodge was very noticeable compared to the Ford. The goal was to see the country with this vehicle, not crane my neck doing so.
As we have now driven 30,000 plus miles across this country I would not want to miss all the beautiful canyon walls and that golden eagle that followed us in Utah on the way to Capitol Reef NP.
I also doubt, the rear axle in the Dodge would have cleared all the rocks and brush we encountered on the off the beaten path gravel roads.
The Ford has been good to us, no regrets.

2018 T350HD Dual Sliders
Joined Mar 5, 2015
·
1,830 Posts
I struggled with this decision for a long time. Beauty is in the eye of the beholder, so they are equally attractive and ugly. Only RAM Commercial dealers can do warranty work on the Promaster, so that limits your options. In my area I had 1 Sprinter dealer, 4 RAM Commercial dealers and 62 Ford dealers within 100 miles of my house. It seems like every small town in the south has a Ford dealer in it.

Advantages to the Promaster are the straighter walls and wider interior. Many people have an East-West bed in a Promaster whereas more people do a North-South setup in a Transit.
The Transit is taller inside, important for 6' plus buyers. I find visibility is better in the Transit. Base engines are comparable in power, but Ford offers an EcoBoost which is a really sweet motor offering diesel levels of torque and smoothness using regular fuel.

Promaster used to be a lot cheaper but that difference has gone away. In 2017 the Promaster was almost $9K cheaper than a similarly equipped Transit. These days the difference in my particular configuration is about $100.

Promaster is a foot shorter for comparable interior length. Technically it is under the overall length limit for some National Parks whereas the Extended Transit is just over.

Promaster does have a way nicer rear floor in their brochure. You can get OEM L-track mounted on the floor and both walls from the factory. It's not on the build your own site yet.

Promaster/Ducato has a huge RV market in Europe, so if you are doing a DIY camper there appear to be a lot more vehicle specific accessories.

- The Promaster uses engine braking descending a hill, like most vehicles do, but the difference in ratio from 6th to 5th is almost 30% so the engine screams along, and when you get back down to flat ground it takes forever to get back into 6th.

- The Promaster felt less planted on the road, bu tI was comparing an extended 3500 with a T350HD, so the dual rear wheels were probably a big part of that.

- The seam between the front stationary and rear roll down window sections on the drivers door was right in the middle of my side view mirror.

Any van made up of thousands of parts from the cheapest bidder will be prone to issues, and both the Promaster and Transit have theirs. Both forums have people complaining about various issues, and it seems like they complain equally, but there are more Transits sold in a year than there are Promasters, Sprinters, and NV's combined. I convinced myself that the Transit is probably a little more reliable as a result.

klp said:
Here is Car and Drivers take on the Promaster.
Click to expand...

I remember when that article came out. They said the Promaster felt cheaper and was less equipped than the Transit. Given that the as tested price of the Transit was about $5K more, and the wheelbase was longer, I would expect it to feel cheaper and less equipped. Some of their comments are relatable, but the whole article seems to have quite the bias to it. Too much of what they write in Car and Driver is influenced by advertising dollars. They make little to no money on magazine sales.
P

The Ram is directed towards the commercial market, I have yet to see an ad directed towards non commercial buyers. In fact you can't disable the front airbags for a child carrier. A lot of European parts and accessories are compatible with the Promaster, minus the current drive train.

Ford is trying to cover the entire market, commercial and non commercial. Not sure how many European parts and accessories cross over.

On profit margins, they only need to sell a few Promasters where as Ford has to sell a lot.

148 extended high roof cargo.
Joined Nov 16, 2018
·
38 Posts
the rear axle of the Promaster is very low, but probably the same height as Transit rear shock tower. the solid axle is very noticable, and also looks like it would snag on things if driving off road or to camping sites.

since there is no driveshaft, the floor of the Promaster might be lower. perhaps better for loading things.
P

Joined Apr 18, 2015
·
459 Posts
Since they are both cargo vans designed for the road, both can be modified.
Here is one of the mods being done to the PM axle,

I originally wanted a Ram. They look the best on paper: flat walls, flat ceiling, FWD so a lower load floor, cheaper.

We looked at and drove the Ram first. She fit in it standing up but I had to crouch. Not a big deal for me as I was only planning on using it as a base station and not an RV. The load floor was surprisingly high because of how they attached the rear wheels, another negative. Finally: driving it sucked. It torque steers enough to scare my wife and is generally uncomfortable besides that.

Then my wife spotted a Transit on the lot. It was a medium roof so I could stand up in it. The load floor was the same height as the Ram despite being RWD. We drove it around and it drove just like a car, no difference.

I felt the need to drive a GMC after that. It felt like driving a tank with a little slit window after the ford. My wife refused to drive it, she felt like she couldn't see out of it well enough. And of course neither of us could stand in it.

Even after all that I still wanted a Metris (This was just going to be a motorcycle carrying van) but I couldn'y find one for less than $14,000 more than the Ford so that made my decision for me!
R

tonyc56 said:
I know this is a Ford transit forum but without being biased if you had to purchase a cargo van again. Which van would you purchase and why.
Click to expand...